Support This Away While You Can

SOUND ON, headphones are highly recommended.

"Are you mad at god? Spiteful about your life? Angry at the apparent lack of agency that plagues your somber, self-afflicting soul? Then this is the game for you!"

I gotta be honest, I'm pretty ashamed of this piece. The whininess. the anger towards "god".  I don't know where that all came from — I've got a good relationship with Spirit/Universe/ Et Cetera and just wanted to write about swelling stones (seeds, sedes). But here we are.

With sweet sweet sounds by:

All of these found on freesound.org, layered and stack together to make a new effect :)

As for every norbrun poem I've seen. It takes some time to get into. Almost the first two minutes. But after that... Boy do I love what you managed to make. The atmosphere, the writing; the feel ... it is amazing.

P.S. After a certain time it makes me feel like I'm sitting in an actual sauna. I could even smell the saltiness in the air from the evaporating perspiration.

It means so much to me you took the time to play and comment! Thank you so much!!!

"e d e n" is a submission also by nurbrun. Unlike shining they aren't that into this one, and it's a lot shorter and less interactive. Regardless I still think the writing and atmosphere provided is amazing. They've shown they have a real talent for making these kinds of poetry games and I sincerely look forward to whatever they may write in the future. They described this one as a "Short poem feat. are you mad at god? Are you bitter about your life? Do you feel like you lack agency under the scrutiny of an unyielding universe? TURN THE SOUND ON and use headphones if you can, this was an exploration of the sound component of a poem, so lmk what you think. Honestly didnt want to post this and share it wth the world, i dont like it, I dont like what it says, but ehh its a thing so." and I think that really makes sense for what it says and does as a poem game. It's not a long sci-fi-ish story though it does still follow a very pleading unusual source of information and uses the poetry of prayer to build the world around it.

This one doesn't have ending(s) or an ending you can really reach at all. That's fine, I also think that makes perfect sense for what it's telling or the atmosphere it's building. I agree the soundscape put together is definitely the aspect of this story you should really tune into. It's a symphony of human breathing interspersed with other bodily sounds. Maybe you'll find that a bit gross, but if you're in the right head space for it, you'll easily agree how audio artwork like this really lifts something to an entirely different level. It's a very short poem game, but it's still one you should play. There's nothing more interesting than ominous pleas to the heavens when it feels like the end of the world, and you just want to make things better again.

"the stones and your hands are one" 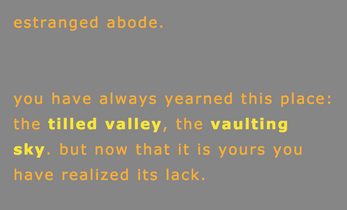 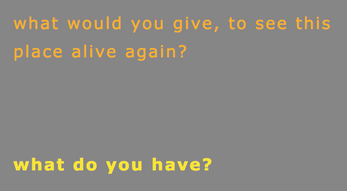